‘Everyone needs connection’: How 4 Voices is helping vulnerable women 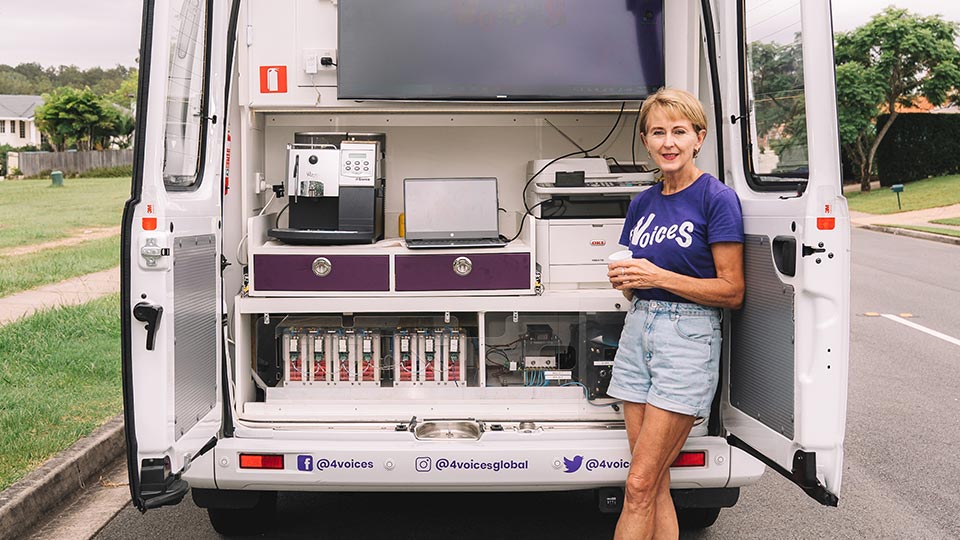 Jo Westh is on a mission to address unjust hardships facing Australian women through her charity 4 Voices. Here's how she is helping them.

The fight for gender equity has come a long way, from a time when women were effectively barred from participating in employment, politics, and most domains of influence.

Despite significant progress in some areas, in others it has been stagnant or even moved backwards.

Men’s violence against women, the fluctuating gender pay gap, and toxic messages from the beauty and diet industry continue to thwart the efforts of the feminist movement.

In addition to these long-persisting issues, homelessness and poverty have become even more prevalent among women. The fastest growing cohort of homeless in Australia is among women aged over 55, reflecting a 31 per cent increase in older homeless women over a five-year period.

This steep incline in homelessness also intersects with a rising number of female prisoners in Australia, a trend which is being driven by dwindling affordable housing, wealth inequities, and family violence.

Jo Westh, founder of 4 Voices, created her charity out of a desire to address some of the unjust hardships facing women and girls in Australia.

Having spent much of her career in male-dominated industries and experiencing the discrimination, dismissal and abuse women face in these environments firsthand, Westh wanted to create a safe space for women and girls to support one another, build self-esteem, and foster meaningful connection.

Westh uses her voice to empower other women

Westh didn’t set out on her career journey with the intention of starting a charity.

For most of her career, she had been a trailblazer in the private sector, having achieved Senior Partner status in an international management consultancy company.

One of the few women in a team of 1500 consultants, Westh recalls how she was expected to work harder for less money and less recognition than her male counterparts.

“I was the youngest manager in the company,” said Westh.

“At the time I thought I was promoted because it made the ‘boys’ feel modern. Others said I was talented and deserved it. Regardless, tokenistic appointments of women to management roles were the norm.”

Over the next few decades, Westh was kept busy with the ups and downs of life. She married, enjoyed steady career progression, and became a mother to four children.

One of her sons went on to be named Australian of the Year for his work in creating the charity Orange Sky, a service connecting people experiencing homelessness with essential services.

Things started to take a downward turn, with Westh struggling against the effects of the economic downturn in the late 90s and early 2000s, balancing international business travel with parenting, and a marriage that was breaking down, leading to an eventual split.

“It was a pretty awful time that is still tough to talk about. I became cocooned into my own private nightmare of debt, no money, no friends, no husband and a fractured family,” she said.

The fear of being alone illuminated for Westh why so many women stay in unhealthy or dysfunctional relationships, preferring the ‘devil they know’ over poverty, homelessness, and isolation.

This realisation, coupled with the experience she gained washing clothes for people experiencing homelessness through her son’s charity, helped Westh uncover her passion for helping others and creating connection.

In September 2019, 4 Voices was created with a vision to empower and protect vulnerable girls and women.

“The idea was to help people who were experiencing social or digital isolation due to domestic violence or homelessness,” said Westh.

“Who could have predicted that the pandemic would exacerbate both? Many struggled with enforced isolation, terrified because of closer scrutiny from a controlling partner, large numbers overwhelmed by the sudden push towards digital devices to avoid direct contact with others. Nobody should go through that period of vulnerability alone.” 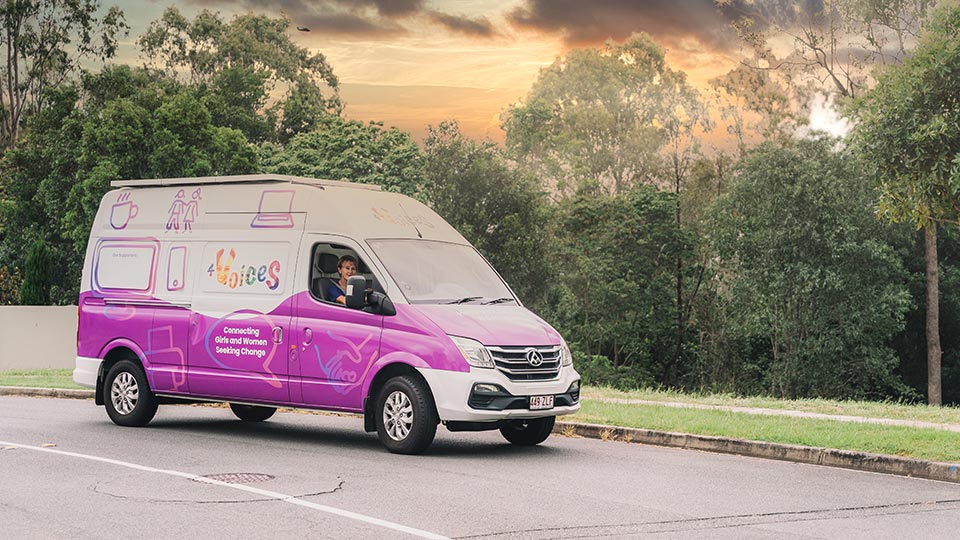 The universal need for connection, understanding and support is at the core of 4 Voices’ mission and operations.

Thanks to community donations, sponsorships, and the hard work of volunteers, 4 Voices supports women all over Australia with emotional support and connection, help in accessing technology, essential community services, and employment support.

Women in abusive relationships frequently have limited access to independent finances and may even be denied their own personal mobile phone or private internet access as a means of wielding power and control.

This places women in an extremely vulnerable position, where they can either remain in their unhealthy or dangerous relationship, or leave without the resources and support they need, placing them and their children at risk of homelessness and all the perils associated with sleeping rough.

The period in which a woman is trying to leave an abusive relationship can be the most dangerous period of all, and without support it is a dark and scary time.

Perpetrators of family violence and violence against women often deliberately isolate their victim from their support networks, cutting them off from family and friends.

By the time a woman has managed to plan her escape, she can find her support network seriously diminished or non-existent. This is the desperate situation that 4 Voices exists to protect women and girls from experiencing.

“My own troubles pale into insignificance compared to those of the incredible women I meet on a daily basis,” said Westh.

“Women who are told so frequently that they are worthless start to believe it themselves. Women who experience beatings, humiliation, torment, ridicule, some who escape violence to live in their cars, on the streets, sometimes with their kids.

“I will work as long as I can to ensure that no other girl or woman gets to the age of 60 before she learns to trust her instincts, to back herself, to find her voice.”

The 4 Voices Community Hub is a purple van operated by volunteers that offers a convenient, accessible, mobile space where women can access support.

This includes providing access to a mobile phone or computer, connecting them to organisations that can provide food and shelter, or support with resume writing or searching for pathways back into the workforce.

For others, simply having a conversation with a supportive volunteer over a cup of tea is enough to reduce the devastating impacts of isolation. 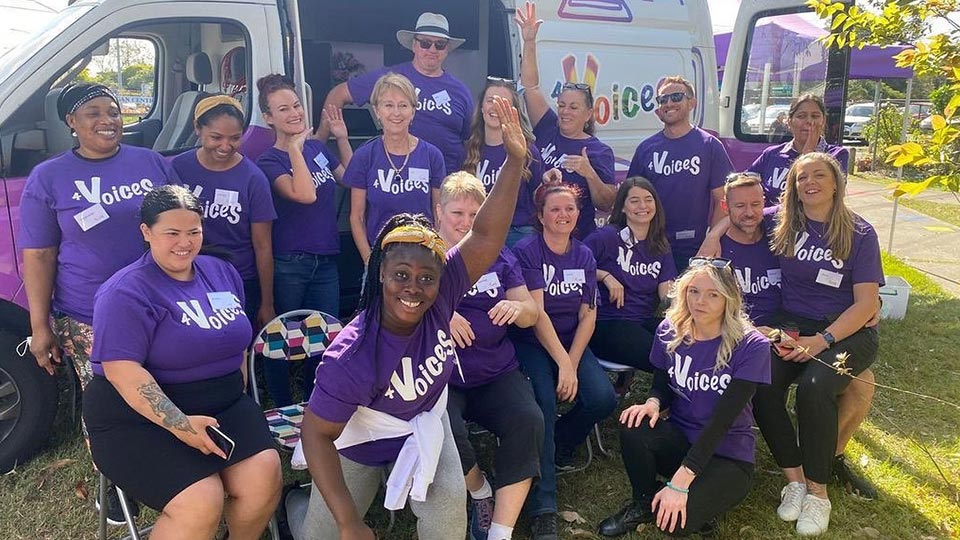 Jo Westh with her team of volunteers.

Addressing the systemic causes of isolation and disadvantage

Westh is determined to break the cycles of poverty, low self-esteem and insufficient support networks that is causing far too many women to end up homeless and vulnerable.

“Our systems need changing. Every time a woman reports abuse, there are invasive questions asked, scrutiny on the events, often without compassion and with judgement,” she said.

“There are hundreds and hundreds of cases of abuse, just in my experience, that go unreported because of a fear that the reporting will result in a wrap over the knuckles to the abuser at best, and increased torment or worse to the victim.”

Negative assumptions and false beliefs about homeless people also create barriers to supporting vulnerable members of our community. Sadly, many people in our society buy into the myth that homeless people are dangerous, frightening, and a drug or alcohol addicted criminal.

The causes of homeless are varied and complex, and the scary reality is that it could happen to any of us.

Westh urges people not to avoid eye contact or conversation with homeless individuals or dismiss their hardship with a flippant suggestion to ‘get a job’.

“This is just ignorance,” she said of these harmful, victim-blaming assumptions.

“Jobs are hard to find at any time, never mind when you have no place to sleep, no food, no clean clothing, no one to talk to or get support from. So many people are dealing with trauma, mental health issues, language difficulties, abuse. Dealing with life is their full-time job.”

You can support the incredible work of Westh and her team of volunteers by visiting the 4 Voices website, donating or volunteering your time.

You can also contribute to a kinder, more caring world by stopping and talking to someone who is homeless the next time you pass them.

“Their stories deserve our attention. Everyone needs connection, and everybody’s story is unique and worthy of listening to,” said Westh. 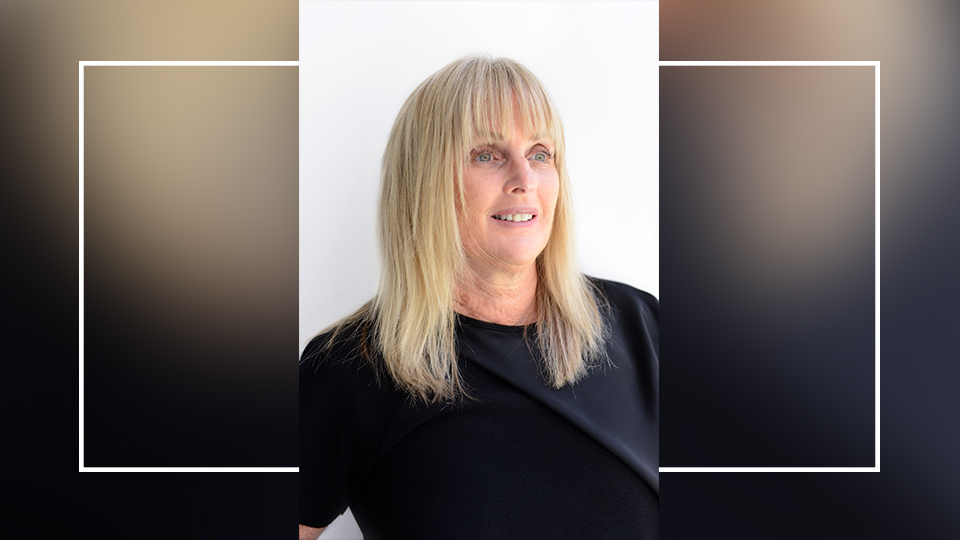 Sisters Inside: How Debbie Kilroy went from prisoner to protector of women’s rights

Sisters Inside is supporting women in and out of prison to re-establish their lives, empowering them to break free of the cycles of disadvantage. 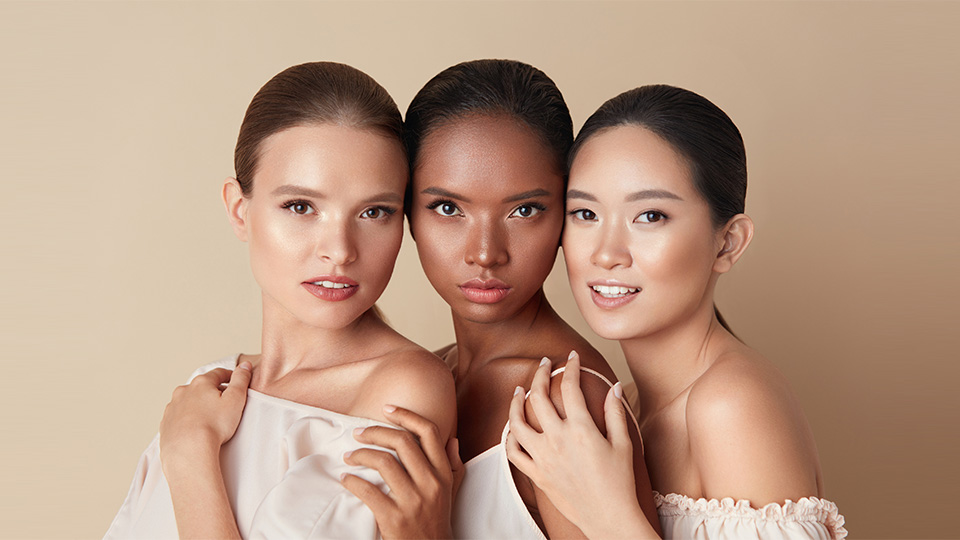